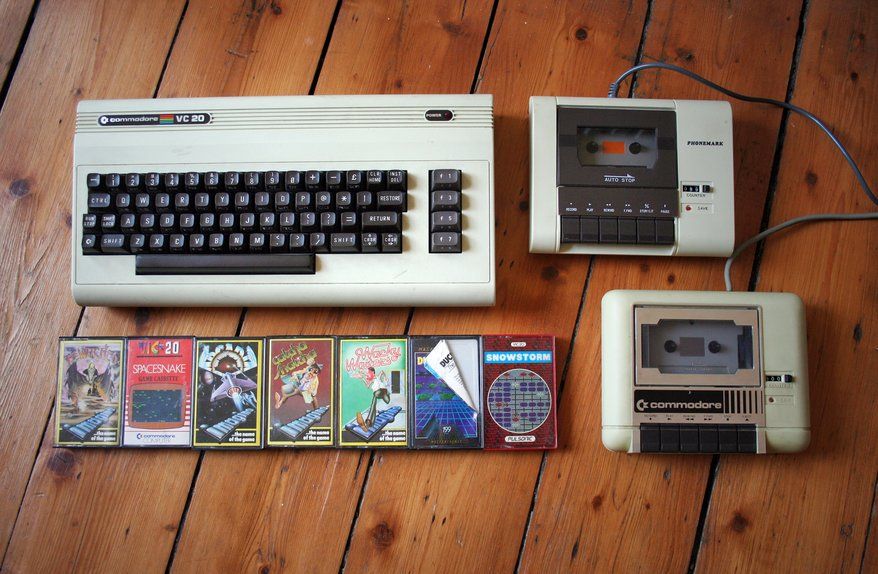 Home computers, programming, technology and web development are industries that grew up with my generation. There was no such thing as the internet or cellphones when I was a child, and I am still under the age of 40. (Here I am incriminating myself, in an industry where no one is over 25). We were the first generation to have computers in school at all. Software engineering and web development didn't exist yet, therefore they were never offered as career tracks. In school we were taught Basic 2.0. and learned to move a large blinking lime green or burnt orange cursor twenty steps across the tube tv sized screen of a bulky metal machine. Most of our work was completed in the terminal window, none of the peppy user interface windows you see today had been dreamed up yet. Everything about early computers was cold and industrial. Programs were loaded with cassette tapes, and gaming options were limited to primitive versions of Frogger, Avengers (Space Invaders) and text based games.

I was eight years old around this time and my dad bought our first home computer, the Commodore Vic 20. My Mother was furious. She thought it was a complete waste of time and money, and couldnt imagine what we'd need one for. Shortly after we upgraded to the Macintosh Lisa II. These are the machines I spent my childhood days at, locking myself in the basement, writing my own texted based choose your own adventure games (living the stereotype!). I was hooked, and I've been using computers every day since then. Computers were natural for me, I understood their clear, linear procedural ways, and black and white "thinking", but it was still years before I'd find my way back to it as a chosen profession.

As a young adult, I tried a series of promising professions but found that I was disappointed in them all. I didn't feel challenged. Very few of my career choices satisfied both my craving for technical, science and logic, and my creative, artistic, literary side. I was bored easily and was looking for something that really pushed me and kept moving like I did. It didn't occur to me to consider programming. From the outside, computer science appeared to be an overcomplicated, and dry, isolating profession, that surely no one without a masters in advanced mathematics should consider. I believed in a stereotype, as many outside "the world of programming" bubble do. I imagined that software engineering and web development was limited to young male basement dwellers with pocket protectors and coke bottle glasses, awkward anti-socialites who had chosen programming over accounting. Nothing about the stereotype appealed to me, nor did I think at that point it was within my abilities.

My journey back to programming really happened by accident. One day I fell down a bottomless rabbit hole. It started with photoshop in photography school, and eventually evolved into web design in my graphic design school. I was still not satisfied with just making images, I wanted to "make computers do stuff" but was still convinced programming was out of my reach. Meanwhile, on the side I was becoming the go to computer repair person among my family and friends picking up side work by spending hours diagnosing and debugging their broken and virus infested machines. One day while digging through one of the countless web resources online, I stumbled across the "Hour of Code" campaign. It was short and sweet but shattered my illusion that programming was limited to rocket scientists, and rekindled my passion for code.

I'm not sure I could count the number of desktops and laptops I have personally owned over the past 30 years. My current household of two people consists of four laptops, an Ipad, an Imac, an android tablet and two smartphones. I can no longer imagine going back in time to not being connected in some way. I grocery shop online, all my classes are online, I socialize through an online meetup I have created, and use technology to stay in touch with my friends and family all over the world. In contrast, my other half grew up in a remote village in Fiji without power or running water and didn't see his first computer till he was twenty. He has owned two laptops throughout his entire life. While intelligent and mechanically inclined I see that his computer illiteracy often becomes a challenging hurdle in his career and in managing his personal life. This is by no means an attempt to belittle those who are less than proficient with computers, there are many days that I feel like switching off the virtual world to be more present in the physical one, but I do believe that fluency in technology has become a mandatory skill for modern life, and at the very least in Western Civilization and the business world.

Quality of life, I have decided, best sums up what stirs within me a desire to become a developer. Both the opportunity to improve my own quality of life through a respected rewarding career, but also to use this skill to improve the quality of life far beyond those I am close to. Programmers are the modern day rockstars and superheros of the future. Imagination and technical skills give developers the superpowers to affect the daily lives of the entire planet, whether through the creation of social media tools, smart home security systems, personal banking, embedded systems in lifesaving medical equipment, or government surveillance, just to name a few. Computers touch every aspect of our lives from personal to politics. Even toddlers these days effortlessly navigate an Ipad to their chosen games and shows with frightful expediency. Where else is there a skill such as this, that is so widely able to access any field and all aspects of life. Then there are the obvious perks as a developer: decent pay, employability, positive job growth outlook, plus it looks great on a business card, but to me, there is so much more to it. Programming is the art of solving tangible problems through effective abstract algorithms. What could be more creative than that? It's a way of thinking. How can I solve this problem most effectively, with the least amount of effort while incorporating the knowledge and tools of my predecessors?

The Tech industry is limitless, constantly evolving, challenging our ideas about ourselves and the world, improving our lives in one way or another on a global scale and I'm happy to say that with these qualities I've finally met my match.